This blog is just an archive now.  My new website is www.chloeherington.com
Posted by Chloe Herington at 3:46 AM No comments:

This is coming up in April.... 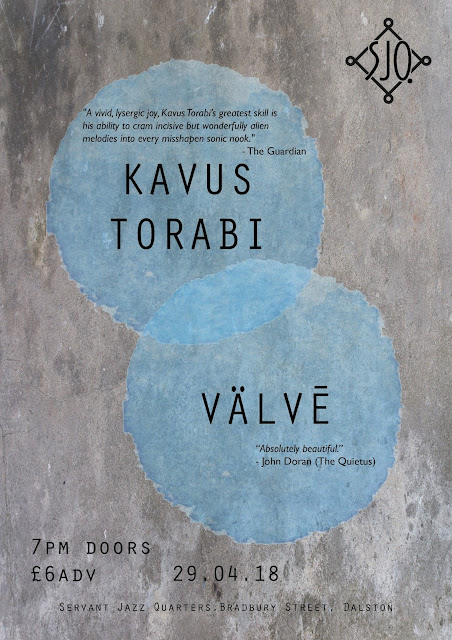 Posted by Chloe Herington at 4:30 AM No comments:

December started with an experimental outing at Corsica Studios playing bassoon with effects in an improv set with Gnod (R&D), John Doran, Sam Barton, Mark Pilkington and Mark Dicker. It was psychedelic and immensely fun.

Shortly after that, I guested on soprano sax with Daniel O'Sullivan's band, Dream Lion Ensemble at Servant Jazz Quarters, filling in for an injured Alex Ward. Such beautiful music - it was a priviledge to be a part of it and I hope I did Alex justice! You can find Daniel's album here - it's super lovely... https://dosullivan.bandcamp.com/album/veld

I was also super chuffed that VÄLVĒ track, 'lights', was voted at #18 in The Quietus's top 50 tracks of the year - what an honour!

2018 starts off pretty excitingly too. First up, Knifeworld are doing a double set giant show at The Lexington on the 20th. We're rehearsing up over two and a half hours worth of material, some of which has never been performed live before. An endurance test!

Next comes a VÄLVĒ show in Tufnel Park as a trio once more, supporting Ciara Clifford. January then ends with a spot of bassoon guesting with Mally Harpaz in Kings Cross. Mally will be supporting the glorious Jack Cheshire band. It's the first of two nights I'm putting on at Westminster Kingsway College theatre, the second of which sees Charles Hayward's Data Quack with Alex Ward in support. I'm rather excited as Data Quack at The Albany in Deptford was one of the best gigs of 2017 - my tiny mind was completely blown!

Then the big comes up in February - Knifeworld are off to play Cruise To The Edge, setting sail from Florida to Belize City and Mexico Costa Maya! 3 sets. 3 countries. Potentially some dolphin sightings. Most exciting!


Posted by Chloe Herington at 6:21 AM No comments:

The first V Ä L V Ē full album is now finished and at the mixing/mastering stage. Here's a snippet:

Earlier this week John Doran of The Quietus played recent release 'Lights' as guest presenter on BBC Radio 3's Late Junction - you can hear the whole show HERE. What a show - much love to John for including us and do check out his amazing selection. Some treasure there for sure.

Physical copies of EP #1 [The Theosophical Society} are now completely sold out but digital copies are available from HERE.

V Ä L V Ē action is in the pipeline; new instrument building, new songs....further new on this in due course!

Posted by Chloe Herington at 12:40 AM No comments:

Necro Deathmort approached me a while back to arrange 'Vortex', one of their tracks, for deep wind instruments and record it for their new album. It was a fun task, particularly as Contra-Bassoonist, Thomas Stone, arrived equipped with a tube to extend his bell-end to get down to a bottom A! Baritone sax, contra-bassoon and bassoon went down and the finished result is pretty epic. It was an honour to be involved!

You can hear and pre-order the Album HERE.
Posted by Chloe Herington at 10:16 AM No comments: 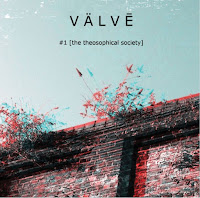 We finally released the VÄLVĒ EP! It's a snapshot of what we are currently performing live in advance of the actual album - which is unlikely to be performed live more than once due to the ridiculous complexity of the instrumentation! It features 4 tracks - a soundscape, a nod to Hilma af Klimt, a tarot game and a song. You can find it HERE

Last weekend, we had the super lovely experience of playing Supernormal Festival at Brazier's Park in Oxfordshire. What a festival! Such an honour to pay there. John and Luke of The Quietus featured tracks from the festival in their show - you can hear it HERE. We were particularly excited to finally unleash 'the smells'!

Next up is a london date at The Harrison (Kings Cross) on 29.08.17 with Bob Drake, Kamura Obscura and Flying Saucer. Details HERE. Smells will be happening. Obvs.
Posted by Chloe Herington at 6:59 AM No comments:

Half The Sky to play Cafe Oto


Totally delighted that Half The Sky have been confirmed to play Cafe Oto on June 22nd. Our first London show! We will be playing Lindsay Cooper's music from Henry Cow and News From Babel, premiering some tracks.

Tickets are likely to go pretty fast so speedy booking is advised. That can be done HERE!
Posted by Chloe Herington at 3:23 AM No comments: